Rather than giving a didactic lengthy narrative these articles will instead focus on the common medical themes leading up to, and then during the days of Hajj themselves. Hajj spans from the 8th to the 12/13th Days of the Islamic month of Dhul Hijjah.

This is the second of a series of articles being written in the spirit of helping prospective Hajj Pilgrims avoiding commonly seen medical mishaps based upon the authors  11 years experience accompanying pilgrims to Saudi Arabia for the Hajj.

Hospitals in Makkah, Madinah and Days of Hajj

Hopefully during your time at Hajj you will be well and other than a minor cough, odd bump, graze and niggle you will not need the services of a health care professional. However should this be the case, where and to whom to go, can be a nightmare. I will try to summarise the basic structure and facilities as I see them.

To deal with the vast amount of expected pilgrims the Saudi Arabian authorities provide lots of health faculties, which are of three main types

If you need to go to Hospital

Do not be afraid to use the hospitals, however they are likely to be busy and therefore it is important that you select the right place for what you require. For example, in the case of a suspected broken bone, it would be best to go to hospital, which has X-ray facilitates. Therefore my advice is

On arrival to the KSA pilgrims are often given a wristband to wear which contains many important pieces of information including authority office that is responsible for your stay whilst visiting the country to perform this Hajj. The hospitals will need this information if you are admitted.

The biggest challenge pilgrims face is conveying across to the doctors and nurses how unwell they are. So try to be specific and objective. Saying ‘I’m ill’, does not help. Remember the hospitals are dealing with people from different nations, and are challenged by language barriers, cultural differences, and people’s expectations. If you cannot explain yourself, then you are already on the back foot. The ability to clearly communicate your problem coupled with a good listening ear is the key to success.

This then leads me to suggest that sometimes its better to travel further afield to a distal hospital away from the rush of the congested closely located clinical hub. You are more likely to be seen sooner and have a clinician who can give you more time. This may involved a 30-minute or so taxi journey and some expense however it may be worth it. For example in Makkah the Al-Noor tertiary Hospital has served me well even though it’s a 30 minute or so drive away from the Main Haram area of Makkah.

One of the things that frustrates pilgrims is the lack of apparent clinical correlation between UK and foreign practice. For example in the UK we would follow the British Medical Guidelines and likewise in Saudi Arabia they will follow the Saudi Guidelines’. This difference should not be interpreted as poor practice. The principles of medical care are in generally the same all over, but the names of medicines, duration and delivery of treatment and other such matters will differ.  This said, poor communication can lead to poor care, so if you are not sure, ask and ask again.

Like mentioned above, all treatment for the Hajj pilgrims is free which includes in patient hospital stays. If you are in need of admission the authorities will often ask to retain some from of documentation from you. Therefore it is vital you do take some form of Hajj pilgrim identification with you when visiting a hospital.

Also men and women will be housed in separate wards and it is unlikely that partners will be given easy visiting rights. Therefore, as a patient, keep a mobile phone and charger with you, as it may prove to be your best form of communication.

Healthcare in the Haram Masjid in Makkah

The grand Masjid in Makkah is the largest masjid is the world and during Hajj season up to hundreds of thousands will be in its boundaries at any one moment in time. So not surprising people do fall ill within its complex. Should this happen, small clinical rooms are located within the masjid itself with the largest on these being on the ground floor at gate number 5, Ajyad Door. This is where patients are most likely to be taken, from which point they would most probably be moved to the Ajyad Hospital, which is approximately 100 metres away from this entrance.

Saudi Arabian healthcare in the main has separate male and female areas with respect to wards and hospitals. Emergency departments do see both sexes but the triage and initial assessment areas although close, are often geographically apart. This level of segregation is not so apparent in the small over congested temporary clinical hubs mentioned above.

The above point is of importance, especially in cases of gynaecological issues, such as suspected miscarriage where, unless you are clinically very unwell you will probably be redirected to a female area or womens hospital. Therefore I would advice all female patients, if they have gynaecological issues to try and determine the best suitable female healthcare facility to serve their needs.

Saudi Arabia in keeping with most Middle Eastern countries has a developing mental heath care service, which is not at the levels we see in the UK. Psychiatry services do exist, but you are unlikely to find a psychiatrist with ease. So prevention is better that cure, especially with regards to psychiatry issues. Patients should not stop taking any prescribed mood altering drugs with out specialist advice, as this seems to be an increasing problem with visiting pilgrims. Furthermore each pilgrims needs to ensure that they have brought enough medication with them as sourcing some of these drugs abroad can be very problematic.

It would seen a touch premature without mentioning the healthcare set up in the 5 x 5km areas each of Mina, Arafat and Mudzallifah where the sea of up to three million people will move on mass as they carry out their Hajj rituals. Such a congested environment will challenge any healthcare structure and Saudi Arabia is no exception. These areas are prepared months in advance to welcome the millions who will spend, in most cases no more that 12-24 hours an that location and then move on and not return. 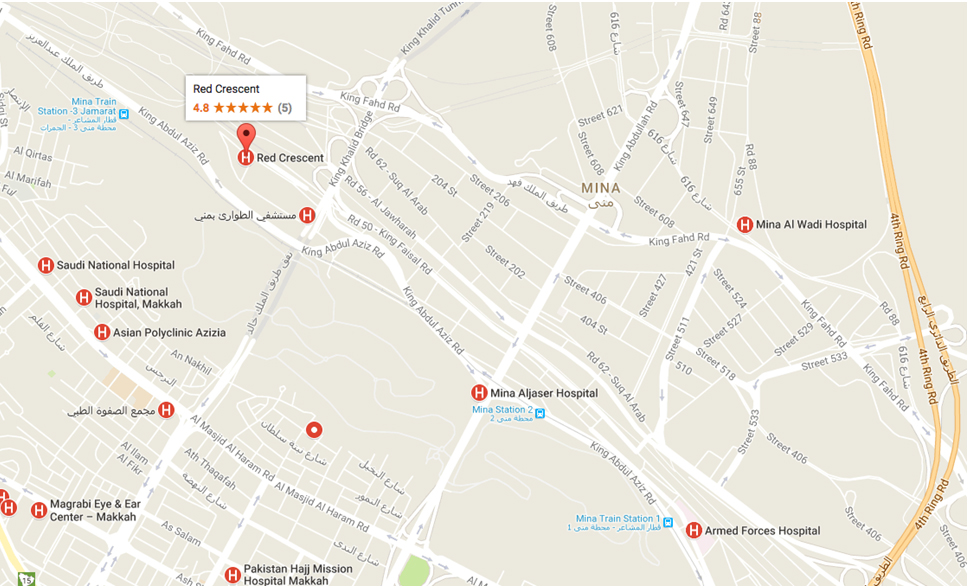 All three areas have their own dedicated hospitals and well as number smaller satellite clinics located every few hindered yards. Mina itself has more that one hospital, as it is the area where most pilgrims will be spend their time during the days of the Hajj rites.

The above shows the location of the three main Hospitals in Mina – Armed Forces Hospital, Mina Al Wadi Hospital and Mina Aljasar Hospital (the largest)

Without stating the obvious these hospitals are extremely congested, overrun with long waiting times. The Mina Aljasir is the largest and houses an Intensive Care unit.

In summary the healthcare services provided are busy, congested, challenged by numbers but are housed by able staff. The key is going to the correct place, with the correct people and to use the correct methods of communication. Speak in English, as this as the universal medical language.

About the Author
Mr Imran Zia is a Consultant in Emergency Medicine at the Whipps Cross Hospital, Barts Health, London.

He has travelled accompanying pilgrims as a medical advisor and tour group doctor to the Hajj for the last 11 years. Over this time he has gained a valuable insight into the common medical themes that affect pilgrims and how they can be addressed in a practical manner, at times where local medical help may not easily available. These short articles are being written with a ‘prevention is better than cure’ mind set. The numbers of years experience based upon exposure, dealing with illness in a congested foreign healthcare structure has placed him in the unique position to be able to share

OVER THIS TIME HE HAS GAINED A VALUABLE INSIGHT INTO THE COMMON MEDICAL THEMES WHICH AFFECT PILGRIMS AND HOW THEY ARE ADDRESSED IN A PRACTICAL MANNER, AT TIMES WHERE MEDICAL HELP MAY NOT EASILY AVAILABLE.

HE IS A GUEST WRITER FOR CBHUK IN MATTERS PERTAINING TO HEALTH AT HAJJ.

Menstrual Issues: Getting it right for the Hajj

MR IMRAN ZIA BSC MBBS MRCS FRCEM PGDIP (MED ED) Guest Writer & Medical Adviser CONSULTANT IN EMERGENCY MEDICINE WHIPPS CROSS HOSPITAL BARTS HEALTH MR ZIA IS A PRACTICING EMERGENCY MEDICINE CONSULTANT AND HAS TRAVELLED ACCOMPANYING PILGRIMS AS A MEDICAL ADVISOR AND TOUR GROUP DOCTOR TO THE HAJJ FOR THE LAST 11 YEARS. OVER THIS TIME HE HAS GAINED A VALUABLE INSIGHT INTO THE COMMON MEDICAL THEMES WHICH AFFECT PILGRIMS AND HOW THEY ARE ADDRESSED IN A PRACTICAL MANNER, AT TIMES WHERE MEDICAL HELP MAY NOT EASILY AVAILABLE. HE IS A GUEST WRITER FOR CBHUK IN MATTERS PERTAINING TO HEALTH AT HAJJ.