The world’s largest exhibition on the Hajj, the pilgrimage to Mecca, is to be staged at the British Museum, it has announced.

Manuscripts, diaries, historic photographs and contemporary art will be displayed to mark the annual ritual, undertaken by Muslims across the world.

The museum’s director, Neil MacGregor, said the Hajj was a cultural phenomenon “that needs to be better understood”.

Hajj: Journey To The Heart Of Islam will run from 26 January to 15 April.

Every adult Muslim is meant to undertake the Hajj at least once in their life if they can afford the journey to Saudi Arabia and are physically able.

Many Muslims save for years in order to perform the pilgrimage. 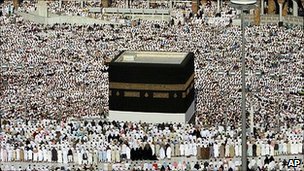 Once they arrive, they must brave vast crowds and the fierce heat of the desert as they perform the Hajj rituals.

The exhibition will examine the pilgrim’s journey, the rituals and the destination of Mecca.

It will also feature the work of contemporary Saudi artists such as Ahmed Mater and Shadia Alem.

Mr MacGregor described the Hajj as a “supreme spiritual moment for Muslims” which “shapes the notion of the Islamic community worldwide”.

He added: “Very beautiful things, supreme works of art, have been made to be sent to Mecca to accompany people.

“We’ll be looking at some of those objects and they are supreme.”