HAJJ CANCELLED FOR BRITISH MUSLIMS IN THE UK

On Monday 22nd June 2020, the Saudi Ministry of Hajj & Umrah announced that the numbers performing Hajj will be “very limited” and that only  Muslims from various Nationalities residing in Saudi Arabia will be allowed to perform Hajj 2020.  In an official statement, it said:

“In light of the continuation of the coronavirus pandemic and the risks of infections spreading in crowded spaces and large gatherings, it has been decided that Haj for this year (1441 H/ 2020 AD) will be held whereby a very limited number of pilgrims from various nationalities who already reside in Saudi Arabia, would be able to perform it”.

“The decision was taken to ensure Hajj is performed in a safe manner from a public health perspective while observing all preventative measures and the necessary social distancing protocols to protect human beings from the risks associated with this pandemic and in accordance with the teachings of Islam in preserving the lives of human beings”.

This means Hajj  packages for all International pilgrims including those from the UK have been automatically cancelled by this announcement.

“Hajj is one of the 5 pillars of Islam which every Muslims aspires to undertake at least once in their lifetime, and many would’ve saved their lifetime to go this year. During these unprecedented times, public health has to be put first.  Owing to the Coronavirus pandemic, every country in the world has had to tackle the spread of the virus including the UK.

A global event like Hajj attracts millions of people from around the world, and to maintain social distancing measures and a safe and comfortable environment for the Hajj rites to be completed would’ve been a public health challenge and near impossible.

We support the decision by the Saudi Authorities to hold Hajj this year for a very limited number of citizens and residents from different nationalities living inside the country, to control the spread of the Coronavirus.

It is important that those who had booked to undertake Hajj are either refunded or have an option to take their bookings forward for Hajj next year, and that they are given the guarantees by their respective tour operators.  Pilgrims should check that they have a valid ATOL certificate which affords them the financial protection.

In the meantime, we are working with Trading Standards and the City of London Police to clamp down on rogue and unscrupulous agents and anyone affected adversely should report the agent  to them.

“Naturally Muslims outside the Kingdom of Saudi Arabia will be disappointed at not being able to undertake the Journey of Hajj, which they would have spent years saving for and for many it would have been their first time visiting the holy city of Makkah.

As countries around the world battle to control the spread of the Coronavirus, there was always going to be a challenge to hosting Hajj which attracts around 2.5 million people each year from over 140 countries, in a safe environment whilst at the same time complying  with public health requirements and social distancing measures in order to reduce the spread of the virus in a crowded place.

We support the decision made by the Saudi authorities to allow its citizens and residents from other nationalities residing in Saudi Arabia to be able to perform Hajj in limited numbers as a precaution to preserve the safety and security of the pilgrims.

The challenge now is to work with Hajj tour operators and ensure that those who had booked to go Hajj this year, and find that their Hajj package is now cancelled, that they get a timely refund or a rebooking for next Hajj and that their rights are protected under Package Travel Regulations.  In the meantime, we strongly urge pilgrims to check that they have a valid ATOL certificate issued for their booking.  Further guidance can be found on our website www.cbhuk.org “.

A spokesperson for the National Executive Committee at the Licensed Hajj Organisers (UK) said that they had advised all of its members to be transparent in all their dealings when guiding Pilgrims with regards to Hajj 2020 bookings and at all times adhere to UK Package Travel Regulations.

“Going for Hajj is one of the biggest events in a Muslim’s life, so it is naturally saddening for British Muslims who had made plans to go, to hear they will be unable to perform the pilgrimage this year. But in these unprecedented times, it is imperative that public health is put first.

“And whilst physically unable to be present, the symbolic messages of Hajj – in particular that of the equality of man regardless of race, colour or creed, made especially relevant in light of recent global events – must continue to reverberate within British Muslim communities and guide our efforts to work towards a fairer and more just society for all.” 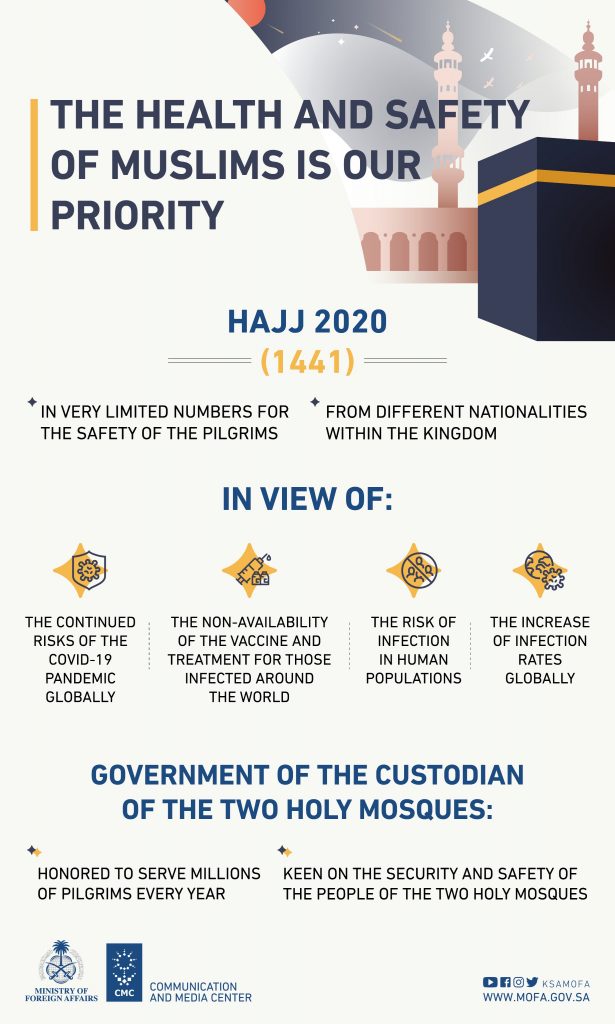