The Kaaba, House of God in Mecca (Makkah) Saudi Arabia where Muslims face in direction for prayer and where pilgrims circumambulate the Kaaba

Up to 15% of British Muslims planning to take part in the annual Hajj pilgrimage this week will have fallen foul of
unscrupulous operators selling package tours to Mecca, it has been claimed.

The Council for British Hajjis said it was the worst year yet, with many people being driven to fraudsters by the economic downturn and rising costs of travelling to Mecca.

Hajj tours are big business. A quota of 25,000 pilgrims from Britain are allowed into Mecca each year – and it can cost between £3,000 to £5,000 each to get there. It is a multi-million pound industry.

Some of those defrauded will not get to Mecca but others will not even realise they have been targeted until they arrive in Saudi Arabia and find they have not got what they were promised.

There are reports of pilgrims being locked out of apartments they think they have booked, or finding hotel reservations have not been made.

Rashid Mogradia, director of the Council for British Hajjis, a charity which works for the welfare of British pilgrims, said: “There’s anything between 20,000 and 25,000 British pilgrims that go across for the Hajj and we anticipate the figure to be 10 to 15% of those [who are] falling victim to Hajj fraud.

“Only a few years ago we worked with the Department for Business under the old government and saw an increase in the ATOL [Air Travel Organiser’s Licence] protection scheme that these tour operators had, so we brought about governance in the industry.”

But now he said that seemed to have fallen by the wayside. 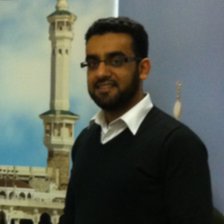 The Council for British Hajjis is campaigning for the government to do more to regulate Hajj tour operators.

The Department for Business, Innovation and Skills said it was aware of the problem and urged pilgrims to report anything suspicious or fraudulent to their local trading standards bodies.

The Hajj is the fifth and final pillar of Islam, which every adult Muslim must undertake at least once in their life if they can afford it and are physically able.

Every year more than two million Muslims from around the world travel to Saudi Arabia to converge on Mecca, the holiest place in Islam – to take part.

But Mr Mogradia said the council had seen a “steady increase” in the number of complaints from pilgrims about tour operators.

Many Muslims save for years to take part in the pilgrimage and the cost of getting to Mecca appears to have risen in recent years.

Ahamad Aref Jabarkhan from Farnborough, Hampshire, lost the money he had saved up after he found a package on the internet which was about £200 cheaper than most other deals.

He phoned the operator, who appeared to be a devout Muslim.

But after he had paid a £1,500 deposit into the man’s bank account and travelled to London to meet him and get his tickets, he found all was not as it seemed.

He said: “Before I went to London I had phoned him up. He said ‘Oh brother Ahamad I am on my way to the embassy in order to get your visa… you just come with your passport and the remaining money. Once I finish from the embassy I call you up and let you know the location where we can meet’.

“So I said ‘well I have the office address, I would rather wait in the office’. So I found the place and it was an empty locked up shop – I said OK, there you go.”

Mr Jabarkhan added: “The experience which I had is very painful and not affected only me but all my family.

“You know, it’s a thing you are waiting for and you feel that you are ready spiritually to go there and make your childhood dream become true. You are almost there.”

Mr Jabarkhan said he never saw the man again. Surrey Police investigated the case and said they tracked down the man but he was now overseas.

Pilgrims who suffer at the hands of fraudulent tour operators are encouraged to report it to their local trading standards, but few do.

In Birmingham, the Trading Standards team have shut down four businesses this year which were trading illegally. 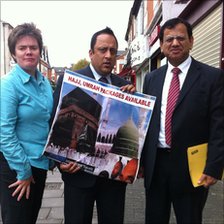 Hannah Davis and Mohammed Tariq from the team have been working with the British Hajj Pilgrims Association to raise awareness among Islamic communities.

But Ms Davis said it was hard to get people to come to them.

“Because it’s community based people weren’t coming to us, they were going to the mosque,” she said.

“In relation to people trying to get their money back – the best way to do that is to come through us.”

Birmingham Trading Standards recommends Hajj packages are booked through a high street tour operator which should be ATOL bonded.

It said this protected the customer’s money if the business ceased trading and ensured people were transported back to the UK at no extra cost.

Mr Tariq said in one case the team had visited a terraced house in the city which was advertising Hajj tours using someone else’s ATOL number.

The householders then denied any knowledge of the business.

The city’s team said the complaints it generally saw were about poor quality accommodation, misleading information about flights and meals not being supplied as promised.